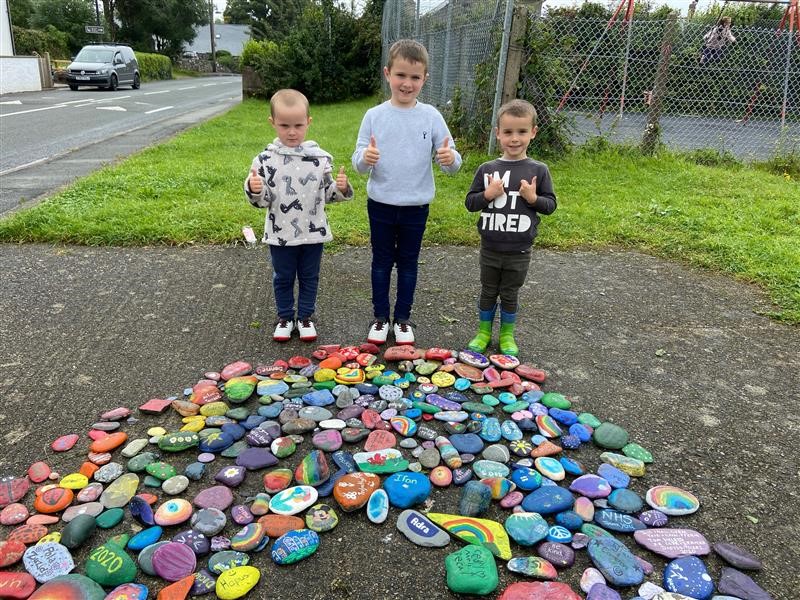 A seven year old boy from Cricieth has successfully raised people’s spirits in Cricieth during lockdown by making his idea of a colourful rainbow mural idea a reality.

It was Llyr’s idea to create a rainbow out of stones and to set it up at the Ty’n Rhos estate entrance. Everyone was invited to paint their rocks and stones to create a colourful and hopeful rainbow, during a time that was very challenging and hard for many.

Natasha, who lives locally in Cricieth contacted us at Adra to ask for support. We helped by asking one of our local contractors, Cybi Cyf, a local company, with providing a frame for the stone rainbow. This was done free of charge so that this could be a permanent memory of the period and of the hope within the community. Adra also took part in this by painting a rock of their own to be a part of the mural.

The rainbow will be set on a slab on a green part by the park in Ty’n Rhos Cricieth.

“It’s fantastic to see communities being creative and full of hope by organising activities like this to bring everyone together. I know the community in Cricieth has organised quite a few creative and community events before and it’s lovely to see the young people in Ty’n Rhos contributing to this.

“We’re also very happy that we at Adra have been able to support this great project to make sure the rainbow will become a permanent mural here in the community.”

Natasha Evans, of Cricieth told us:

“I’m so proud to be part of this community activity and to be a part of a community that comes together like this in such a challenging time.

“Thanks Llyr who came up with the idea and to everyone who has made this possible.”